Elizabeth Warren fan only when she’s opening a can of whup ass on Wallstreet!

OMG, almost felt sorry for the new Wells Fargo CEO.  Then thought nah, he is part of corporate/banker culture that intentionally defrauds millions of people daily.  The standard banker/wallstreet concern is not justice but cost.  Will it cost us more in fines & legal fees than profits!

Are you smarter than a billionaire? Spoiler alert for ETF holders by Jim Rogers

Most investors believe etfs reduce risk in their portfolio because of diversification.  But what happens when everyone pulls the trigger at the same time?  ETFs represent large portions of the market and have cross concentrated holdings.  Let’s just say a little goes a long way!

Here are some visual aids to help the Fed spot the housing bubble. Wolfe Richter 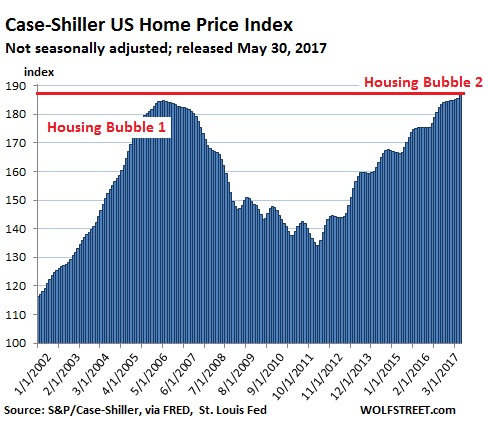 John Embry – King Wold News  For all intents and purposes the world has radically inflated most traditional stores of wealth except silver and gold.  Sadly the average person is going to get crushed when the debt based government merry go round is stopped.

I do not understand the hype about crypto-currencies – risk of hacking – emp bomb – central bank manipulation – and ability to spend it legally.

At least with physical silver & gold it has more than a thousand year history of being considered negotiable money!  Yes central & bullion bank manipulation – but it is still their after a hack or an emp.  Security provided by Glock, AR15, Auto-Shotty and doberman’s.

If everybody is doing it – it must be good!

“The Perils of Complacency” Jim Rickards

If you have not read his newest book “The Road to Ruin” I strongly encourage you to do so.  His previous book “The New Case for Gold” is also an excellent read.

Coming to a city near you

What happens in China has a global effect and central banks may no longer be able to stem the tide with easy money with low or negative interest rates.  Now many countries are directly intervening in their stock markets to create a sense of false security.